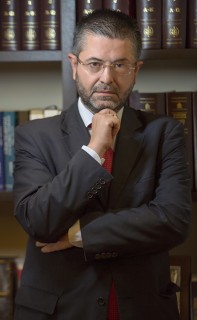 Pavlos Sarakis was born in Agrinio.
He is a graduate of Law School of Athens University.
He furthered his knowledge of criminal law at the University of Rome where his studies focused on organised crime.
He has been called to the bar of the Hellenic Supreme Court and the Council of State
He practices law specialising in criminal law. He is renowned for his rhetorical skills in the courtroom and for his defence tactics.
His daily attendance at criminal courts is proof positive of his outstanding experience in handling criminal cases.
A member of the Athens Bar Association he is also a member of the Hellenic Criminal Bar Association, the Hellenic Association of Jurists for Criminal Law and Justice.

He runs a law firm with the name Pavlos K. Sarakis & Associates.